A startup far from Silicon Valley uses advanced digital technologies and dedication to customer needs to curb the danger and cost of preventing and fighting wildfires.

Drone Amplified is based in Lincoln, Nebraska. It was started to solve a significant challenge: saving lives and cost while better managing land and fires. Founded by two University of Nebraska, Lincoln, faculty, Carrick Detweiler and Sebastian Elbaum, the team sprang from the University’s NIMBUS Lab (Nebraska Intelligent Mobile Unmanned Systems).

The Problems of Prescribed Burns

Prescribed burns are a vital land and wildfire management tool. Starting a fire on purpose, a productive one, that is, is quite tricky. It often involves steep, rugged terrain, sweltering heat, and unpredictable winds. Heavy smoke and nightfall can stymie helicopters and airplanes’ airborne efforts, putting more work on exhausted and exposed ground crews.

One form of a prescribed burn, a backfire, is deliberately initiated in front of an advancing wildfire to starve it of fuel. Setting backfires is treacherous. Success often requires working so close to the wildfire that the inferno’s updraft sucks the backfire toward it.

Prescribed burns are also used for land maintenance. Set to remove shrubs, brush, and fallen leaves and branches, they clear out fuels that would magnify wildfire intensity. Natural wildfires have been part of Earth’s ecosystem for at least 400 million years. Well-intentioned efforts, particularly in the 20th Century, to rapidly extinguish all wildfires have primed vast wilderness areas for violent combustion.

The horrific Yarnell Hill Fire in Arizona in 2013, which took the lives of 19 “hot shot” firefighters, occurred on land that had not experienced fire in 47 years. Chaparral as tall as 10 feet ignited in a 2000F (1093C) firestorm, hot enough to melt copper. 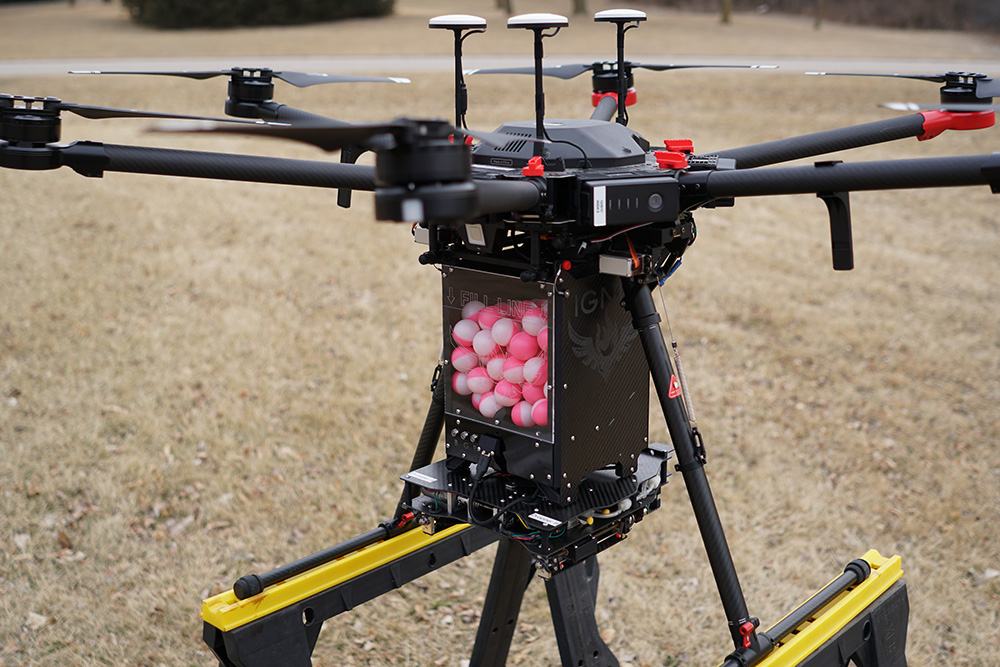 From Problem to Opportunity

Drone Amplified has invested four years in development including nearly weekly discussions with the primary Federal wildland fire management organizations, the Department of Agriculture’s US Forest Service and the Department of the Interior. Technical savvy and a deep understanding of demanding wildfire management needs have produced IGNIS: a fire-managing flying robot.

Drone Amplified fits third-party drones with sophisticated sensors, navigation and automation software, and robotic hoppers of ignition spheres, ping-pong-ball-sized plastic orbs loaded with potassium permanganate. IGNIS pin-injects a ball with a precise amount of antifreeze (ethylene glycol) and drops it away every two seconds. The spheres start burning after hitting the ground.

The robot flies without an internet connection. IGNIS follows a precise GPS-guided pattern input by its human handler with distance to the ground managed with uploaded topography data.

IGNIS can soar at night or through thick inversion smoke while avoiding hazards, including infrastructure such as power lines. Accessing more locations and covering more area than firefighters on foot or in ATVs, IGNIS precisely sets prescribed burns. Even when hovering in a smoke plume, the system relays telemetry such as infrared heat maps detailing fire lines and hot spots.

The solution is dramatically more cost-effective and safer than human-piloted helicopters. With a stock of batteries and an infrared camera a system costs around $45,000. That’s roughly equal to a few hours of helicopter flight time. With IGNIS the US Department of Agriculture realizes  operation costs of about 1/10ththat of a helicopter. 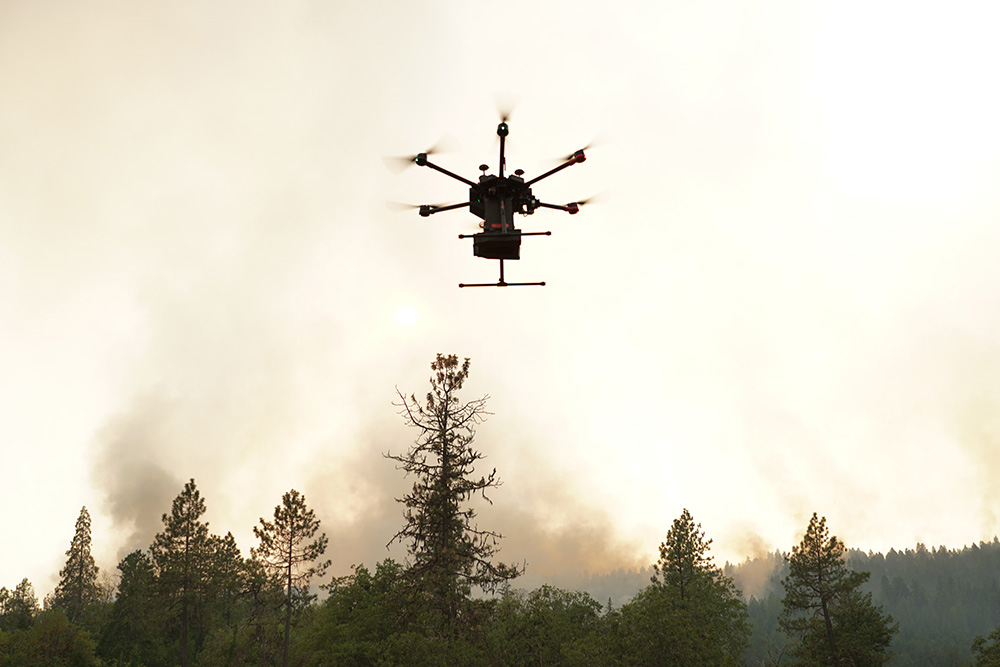 As is frequently the case with robots, IGNIS complements human operators by bridging capability gaps and tackling hazardous or unpleasant roles.

Drip torches, carried by firefighters on foot, are best in small, flat areas.

Helicopters can ignite the largest and most complex areas but are also carry the highest risk and cost.

IGNIS fills a void by addressing vast territory while minimizing risk and cost.

IGNIS’s strong fit for the role made it the first, and currently only, unmanned aerial vehicle (UAV) apparatus approved by the US Forest Service and the Bureau of Land Management (part of the Department of Interior).

The Forest Service is enthusiastic about IGNIS’s performance. Its director, Vicki Christiansen, wants to shift to UAV’s for prescribed fires wherever possible.

Drone Amplified will maintain focus on their core mission and clients. They will expand R&D in AI including deep learning, algorithms that can predict fire activity and plan missions, autonomous health monitoring approaches, and coordinating groups of robots.

Drone Amplified’s work is a convergence of AI, robotics, sensors, and materials science. Their IGNIS project is far more than well-executed engineering. Guided by a compelling mission and focused on solving real customer problems, these entrepreneurs and technologists are grabbing the opportunity to save lives, property, and wild lands.